The Secrets Of Film And TV Puppetry Revealed!

The world's first ever fully comprehensive online training for learning puppetry for the 21st century, broken down from the very basics to becoming a rock star Puppeteer!

Using tried and tested lessons, classes and demonstrations, Master Puppeteer Mike holds nothing back as he reveals all his secrets and techniques gathered from nearly four decades of performing and animating for Jim Henson, Lucasfilm, Pixar and more. Mike is one of only a handful of Puppeteers to have worked in both the analogue and digital world. He continues to work for Muppets and bringing to life his fan favorite Star Wars alien Nien Nunb. 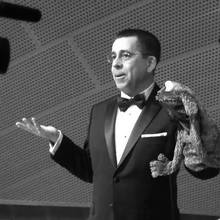 Mike was hired by Jim Henson at the age of 16 to work with the Muppets on many feature films and TV shows and commercials. Also he is well known for his creature performing on several Star Wars films. He is also one of the few people to have transitioned from the analogue era of tape and film, into the digital realm as a character animator for Pixar and Lucasfilm's ILM.Film work includes The Great Muppet Caper, The Dark Crystal, Dreamchild, Labyrinth, Little Shop Of Horrors, Who Framed Roger Rabbit?, The Muppet Christmas Carol, Muppet Treasure Island, The Muppets, Muppets Most Wanted, Star wars: Return Of The Jedi, The Force Awakens and The Last Jedi. TV work includes Fraggle Rock (co-productions), The Muppets (ABC Series), Muppets Wizard Of Oz, The Storyteller, Jim Henson's Mother Goose Stories, The Ghost Of Faffner Hall, The Tale Of The Bunny Picnic, The Secret Life Of Toys, The Animal Show, Shake It Up, Good Luck Charlie, Glee, Lady Gaga Holiday Special, A Very Pentatonix Christmas 2017, Jimmy Kimmel Live and more. Live performances include The Muppets Take The Hollywood Bowl, The Muppet Show Live at The Hollywood Palace Theater and as principle actor in Rope.
1 x payment of $347
4 x Monthly Payments of $87